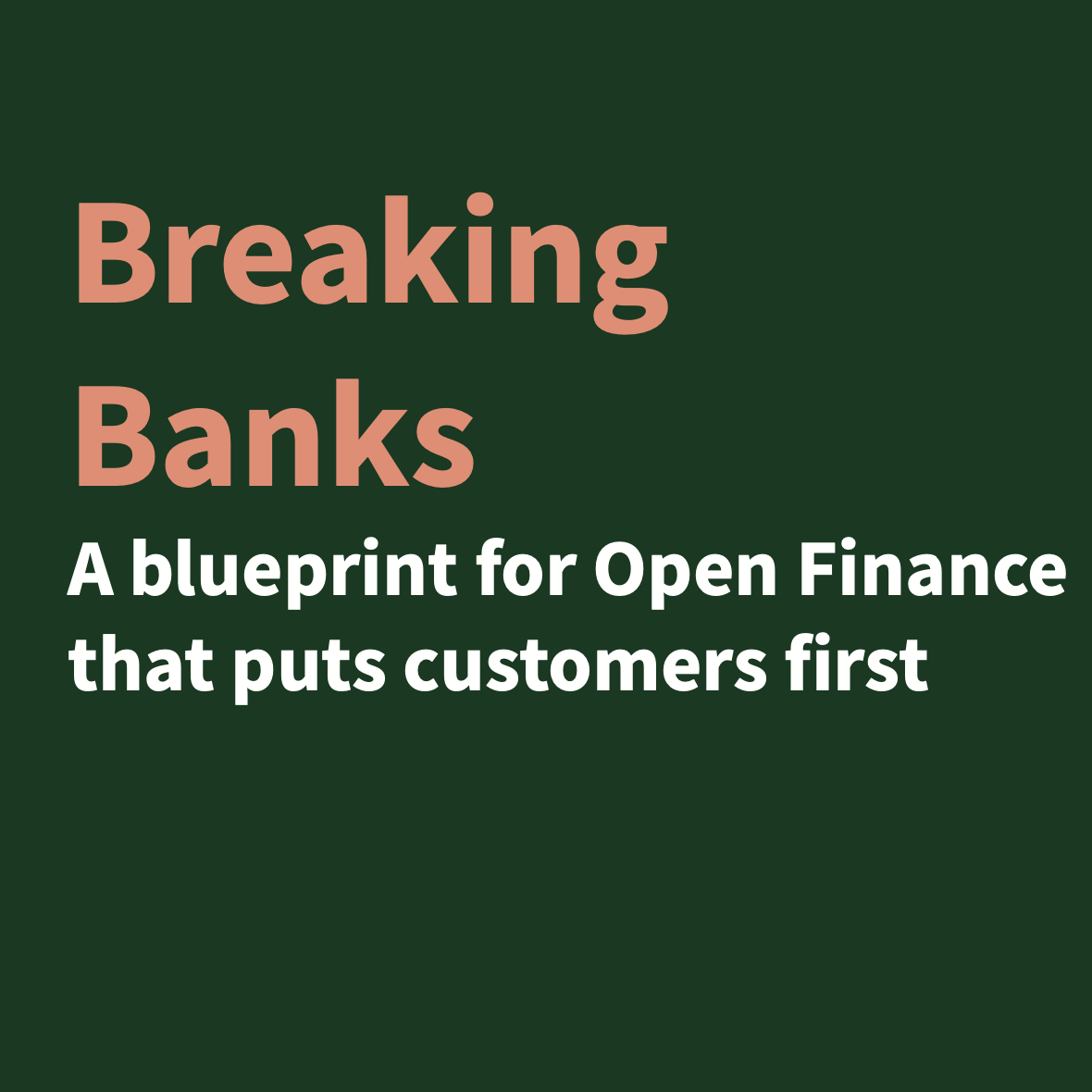 Coadec has launched a new paper arguing for more of an Australia-style, market-led, approach to Open Finance, and calling for regulators to end their overly-standardised approach.

The new paper, ‘Breaking Banks: A blueprint for Open Finance that puts customers first’ highlights how Open Finance can help shape the way millions of UK consumers engage with their finances, provide better and more tailored financial deals, and promote financial inclusion. In addition, the paper calls for the introduction of a far-reaching consumer data right that empowers consumers to share their financial data with third party apps. This comes at a time when banks are seeking to charge third parties to access this data – via so-called “Premium APIs”.

Open Banking is far from perfect. With a little over two million registered customers to date, it is a long way off reaching critical mass. Rectifying previous mistakes such as overly-prescriptive technical standards, and anti-competitive security measures will be key to future success. These errors have played a significant part in thwarting Open Banking’s potential to add $1.4 billion to the UK’s GDP on an annual basis, according to analysis from the Centre for Economics & Business Research.

The UK can achieve an open digital financial services marketplace within two years with the establishment of a consumer data right, and with the help of API platforms, like Plaid, building the connections needed for Open Finance in tandem. The Australian Government took this approach and introduced arguably the most expansive open data regulatory initiative in the world. The Australian Consumer Data Right (CDR) will give consumers the right to access not just their financial data but also utility and telecom data by 2021, even though it was only introduced in 2017.

The UK’s current, highly standardised, Open Banking regime started in 2015 and it is now 2020, with some key aspects still being finalised. This cannot be repeated. The EU has committed to having an Open Finance framework in place by 2024, and the Government must move quickly to defend the UK’s fintech crown.

‘Breaking Banks’ outlines a four-point action plan for the Government and regulators that: empowers consumers to own their financial data and determine who they share it with; ensures the payments landscape is completed; provides the necessary incentive structures to unlock both Open Finance and a broader open data ecosystem; and, proposes a market-led, principles-based regulatory framework that will allow the UK to deliver open finance much quicker than the EU.

Commenting on the report Joel Gladwin, Head of Policy at Coadec, said:

“What Open Banking has shown that when the consumer is in control of their data and who they share it with, this can build trust, drive engagement and empower activity. But the banks were able to send armies of slick lobbyists and magic circle lawyers to Brussels to build extra barriers to fintechs and maintain their gatekeeper roles. By granting consumers a new data sharing right, and encouraging a market of API specialists to compete in building the plumbing for Open Finance, banks will have very little room for maneuver this time. Ultimately, this will allow consumers to access better, and more tailored, financial services than they do currently.”

“Open Banking paved the way for consumers to take control of their finances, but it didn’t go far enough. Open Finance is the next step; it will open up more sectors for innovation – and, ultimately, bring consumers more choice, convenience, and ease when it comes to managing their finances. With or without industry standard APIs, competition will allow firms that specialise in API development and integrations to build the infrastructure needed to make open finance a success.”