Life after Brexit: From the Coadec Community 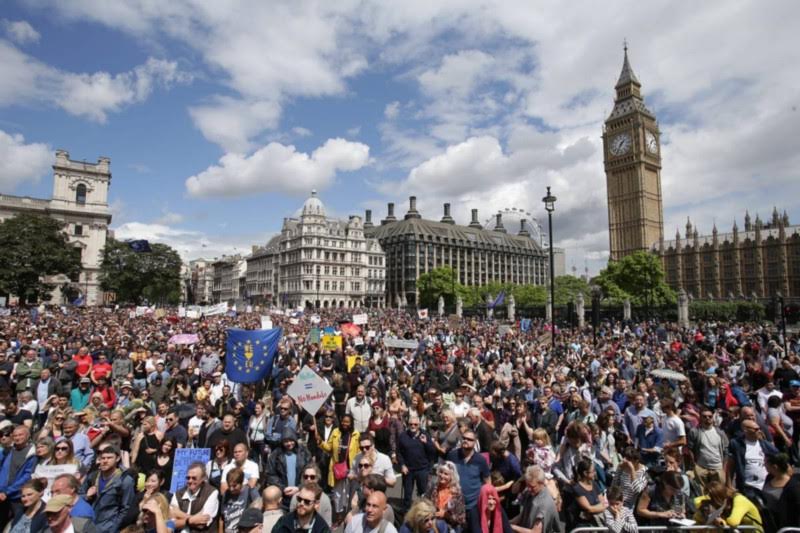 A few days before the UK voted to leave the EU, I wrote a welcome blog as the incoming Executive Director of Coadec.

On reflection and with the beauty of hindsight, I should have written a very different blog. But then it has been a truly extraordinary few weeks.

The pace of change and volume of unknowns have felt overwhelming and I hope that we can now enter a relative period of stability with our new Prime Minister — although if Brexit has taught us anything, it’s not to assume.

In assuming we’d remain part of the EU, I failed to mention the potential impact of Brexit on tech startups in my welcome blog, willfully hoping it would be business as usual. I also assumed I’d be able to set out my objectives.

In truth, my objectives are those of the Coadec community and the two are interchangeable. I am simply a voice representing the policy concerns of our entrepreneurial, inspiring community to Government.

For Brexit has only served to amplify the need for the smaller players and voices to have genuine champions. I can’t pretend that Coadec can speak for everyone in the country who feels they lack a voice. But we can speak for tech startups and Founders across the UK, and loudly bang the drum for the enormous benefits these businesses and their employees bring to the UK economy, given a pro-enterprise, open, inclusive environment.

Over the past three weeks, the Coadec team has been speaking to our community across the UK to understand their immediate concerns and priorities. The next step is to create a detailed set of policy recommendations following a nationwide tour of the UK in August.
I published a blog on Monday covering the important themes resulting from our conversations with the Fintech community. But in this blog I’d like to cover the three most important themes to Founders and tech startups.

I’d love to hear from you if you’d like to join our conversations, or have any feedback: romilly.dennys@coadec.com

From the Community verbatim

“The most significant Brexit uncertainty is what will happen to EU nationals working here in the UK — because startups typically have very international teams.”

What our community says — the challenge:

Access to and retaining talent was by far the top concern amongst the Coadec community. Founders are clear: it is crucial that any changes to freedom of movement must make it easier, not harder, for digital talent to come to the UK, and also, for startups to hire the best international talent.

Although this isn’t new — indeed, in a previous pre-Brexit Coadec survey, access to talent was ranked as the second highest issue of importance to members — the importance to the tech sector post-Brexit cannot be overstated: roughly 1 in 5 London tech workers is an EU national and roughly a third are from overseas.

Welcoming talent: Young UK tech businesses attract a lot of talent from the EU, with UK migrant entrepreneurs behind one in seven startups. The message from our community was unanimous: it’s vital that EU workers still feel they have a future in a UK which remains supportive and open to new talent. This is particularly true for tech startups, who struggle to recruit people with the specific digital skills required, and often struggle to hire people fast enough.

Digital Skills: The need to recruit talent underlines a critical UK skills and expertise shortage faced by our Founders. Research by the European Commission, for example, suggests that the skills gap is larger in the UK than anywhere else in Europe, with 250,000 ICT job vacancies expected by 2020. While it’s important to focus on encouraging international talent, Founders underlined the importance in ensuring that the UK does not continue to lag behind in nurturing its domestic skills base.

Retaining talent: Our community spoke repeatedly of the pressing need to ensure that existing international talent is retained. Uncertainty over current EU nationals right to remain indefinitely in the UK is damaging confidence in what is a diverse and vibrant sector. This comes on top of widespread concern from the community about the complexity, excessive administrative burden and high cost of visas and echoes a recent post-Brexit Tech City survey, where 79% of respondents wanted improvements to the current visa system.

What our community says — priorities

Prioritise the free movement of labour for skilled talent from the EU: The need for clarity and certainty on the status of EU workforce in the UK is vital in order to ensure that startups do not incur an additional ‘uncertainty premium’ when recruiting from abroad. We appreciate that this is a key part of the negotiations, but advise the Government to send a clear, positive narrative throughout negotiations. An immediate concern was the effect the ambiguity was having on employees and the strong feeling that the Government needs to drop its focus on arbitrary net targets.

Reform the current visa system: The referendum result provides an unparalleled opportunity to reform the current visa system, and position the UK as an attractive location for skilled talent. As Coadec campaigned for in 2015, our community continues to press for an improved visa system that doesn’t add friction and requires a minimum funding and process time. The Tier 1 Exceptional Talent Visa could be the first option — we ask Government to consider increasing the cap on numbers, reducing the process time down to 5 days and relaxing the eligibility criteria.

From the Community verbatim

“I think this will significantly hurt the ability for tech startups to establish themselves as global players, as the early growth curve will be so much harder that people will either not take the risk or will give in.”

“The European Investment Fund is the largest investor in UK venture capital firms — whether this funding stream remains in place, and for how long, is a major question mark.”

“Crowdfunding is maturing into a global investment force, supporting more innovative companies as start-ups and SME’s are using alternative finance to mix their investment sources to meet their changing needs.”

What our community says — the challenges

Uncertainty about future access to finance is seen as another major issue for our community. Post-Brexit, there is a significant role for government to provide assurance on European funding, and explore new ways to provide tax reliefs and innovative incentives to encourage pro-enterprise policies.

A pinch on funding: Feedback from our community included examples of agreed funding being suspended, with no assurance as to when this would be resolved. In particular, uncertainty over European Investment Funding (EIF) is causing concern amongst Founders. The EIF acts as a magnifier effect for pulling in other institutional investors, and there is concern that the lack of clarity over future funding may significantly reduce the overall availability of UK venture capital. Accelerators raised particular concern about access to future EIF funding.

Plugging the information gap: 90% of small businesses still go to their high street current account bank for finance — and of those who do not receive finance, 50% give up. Clearly, there is much to be done in this area post-Brexit to avoid lost opportunities. The British Bank recently acknowledged that providing advice and information on access to finance is a problem and this was very much echoed as a pressing need amongst our community, especially across the regions, and relating to alternative finance.

What our community says — priorities

Support for encouraging and extending enterprise: Founders expressed support for Entrepreneur’s Relief and policy measures to support enterprise and entrepreneurship, but expressed concern about the complexity and more importantly, the coverage gap for Founders and early-stage employees whose ownership stake often gets diluted and falls below the 5% qualifying bracket for ER. This creates a situation where the Founders who have often worked the longest and hardest will have to pay full income tax. There was also broad agreement on the need for Government to think imaginatively about pro-enterprise incentives outside of EU state-aid rules. In addition, Founders also raised concern about the potential downstream effects to EIS and SEIS funding models, which could lead to drying up of seed money.

Explore ways to get money to SMEs: In addition to efforts by the British Business Bank, our community was clear on the pressing need for Government to explore the most efficient and effective way to direct money to SMEs, and ensure capital is available for entrepreneurs. Anecdotally, we also heard from our community that banks are tightening SME lending. This galvanises the real need to raise awareness of alternative finance and significantly increase communication channels to startups. It was pointed out, for example, that Whitehall doesn’t offer a communication tool to educate and inform entrepreneurs about the support available to them.

A focus on the regions: Founders in the regions were clear that there is much to be done to support startups at the local level to ensure that towns and cities don’t get left behind. The message was clear: more must be done to support investment in the regions, but also to reduce business rates and encourage enterprise. It was felt that a lack of tech angel groups in the North of England, for example, and the dependence of accelerators on EU Funding, pose a real risk to innovation in the regions and Government needs to find new ways of working with corporates to ensure the progress of the past few years continues. The North East was singled out as one of the areas most impacted by Brexit, as much of the funding over the last ten years has been from the European Regional Development Funds and VCs like Northstar and IP Group. There’s concern too about the next round of ERDF — Jeremie 2 — and the potential shortfall in the funding required to keep growing the tech ecosystem.

From the Community verbatim:

“Data is the lifeblood of the tech industry. Every startup relies on it”

What our community says — the challenges

The community was clear: in today’s digital economy, data and trade go hand in hand. Tech companies are data driven at their core and free flow of data is fundamental. Success of tech startups depends on the ability to move data across national borders. If the UK remains within the Single Market, then it will still fall within the remit of General Data Protection Regulation (GDPR) — this was by far the preference amongst our community.

In the words of our community — key priorities

Restore certainty and a stable legal footing for data flows — Clarity is needed to boost business confidence. Urgent consideration must be given to the merits of maintaining, adapting or completely re-legislating the UK’s data protection law upon Brexit. The community was in agreement that any changes must not restrict the ability of data to flow freely between the UK and the EU.

Potential legislation post-Brexit must reflect EU standards — This was critical for our community, who suggested this could be achieved either by enabling the free movement of data by being part of the European Economic Area in a Norway-style deal or being declared an ‘adequate’ country for the purposes of the transfer of personal data like Switzerland, Canada and Israel. It was uniformly agreed that the UK must not become a “third country” in the absence of an “adequacy” decision.

Explore a range of options simultaneously — The UK has one chance to get Brexit right. Furthermore, for some, Brexit provides an opportunity to make data protection law more business friendly and move to a lighter touch regime than the one under the GDPR. Nonetheless, there was consensus amongst the community: any new legislation must not hamper the UK’s potential ‘adequacy’ status under GDPR.