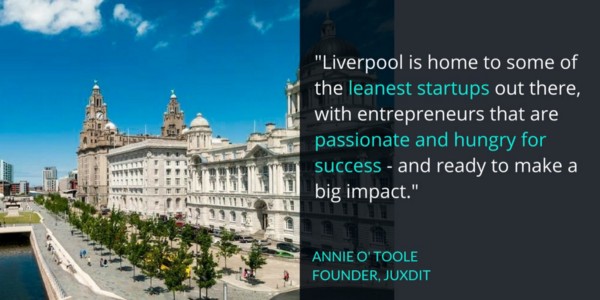 Following trips to Brighton, Cardiff and Newcastle, next stop was Liverpool… to hear first-hand from startups on the ground..

Debbie Edwards is a founder on a mission: “to create a world where the skills, career choices and life aspirations of girls and women are equally matched across every global sector — starting with tech.”
I witnessed Debbie in action when she invited me to attend the first Female Disruptors Hackathon in Liverpool. With the support of young founders, Debbie is helping inspire a generation of young women to reimagine their (tech-driven) future, even if it takes them down the road less travelled.

For the stats speak for themselves: only 17% of tech positions are taken by women. Over 45% of those leave mid career, and 80% of apps are built by men.

But Debbie is determined to break down stereotypes and encourage the idea that tech is often simply an enabler for new opportunities across all industries, sectors and regions.

Some 200 miles away, the chancellor was setting out his own tech-led agenda at the autumn statement; where we “build on our strengths in tech innovation to ensure the next generation of discoveries is made, developed and produced in Britain.” Echoing the Prime Minister earlier in the week who said “Britain will be the global go-to place for scientists, innovators and tech investors.”

Keen to hear the startup reaction, I spoke to Annie O’Toole, founder of JUXDIT: a marketplace specialising in emerging tech and based at the historic Baltic Triangle, close to Liverpool’s docks. The area was at the centre of Liverpool’s industrial revolution during the 18th and 19th centuries and a thriving workshop and warehouse district, handling over 40% of global trade. But now – after decades of lying derelict – home to Liverpool’s fast-growing digital and creative startups, creating new global trade links of their own. For example, Red Ninja who recently secured a £1.1m trade deal on the Prime Minister’s trade trip to India.

Romilly: Hi Annie, great to learn more about JUXDIT. How would you describe Liverpool’s entrepreneurs?
Annie: Liverpool’s entrepreneurs are passionate and hungry for success. The people here are ready to make change and create impact.
Romilly: What do you think are the biggest barriers faced by founders?
Annie: A lack of investment is a concern. Liverpool is a tough city to launch and grow a business, with very little investment here, making it difficult to gain momentum. But the businesses that do manage it, are stronger, more robust and focused than the majority of their competitors elsewhere.
Romilly: Aside from a lack of investment, what are the other barriers to growth?
Annie: Gaining traction across the UK is hard. There is potential here for investors, there’s potential here for those with digital skills and there’s potential here for government. We’ve been voted the most entrepreneurial city for a reason. There’s so much potential for those looking to invest in digital business, we’re home to some of the most promising digital companies around, but gaining traction across the UK for them is difficult – with businesses often going to the States or China, because they’re unable to penetrate the South.
Romilly: Where do you see the greatest potential for Liverpool’s startups?
Annie: There are many startups and digital businesses focusing on VR and AR, with a huge proportion of them winning multiple awards. I genuinely believe that this city has the potential to become a VR hub — the amazing innovation hub in Alder Hey, the launch of Sensor City and the businesses creating and developing amazing products around this area, like Milky Tea and Mashbo, are just the start of this.

With more support from the government, increased investment and a stronger vision for the future, we could truly develop into a city known across the world for its work in these areas.

From the young girls working with Debbie, to the startups at the Baltic Triangle, and the emerging technologies and techniques that are being developed at the regions 3,000 manufacturing businesses: the potential is clear to see.

But there is a lot more that needs to be done; as reflected in the Nesta Digital European Index for digital entrepreneurship. London topped the list, but Liverpool? Out of 50 european cities it didn’t feature. While the scale of graduate ‘brain drain’ is also a serious concern. Liverpool retains just 31% of graduates, ranking it 12th in the UK.

The hope on the ground is that the government will deliver on its renewed commitment to regional growth, including the £400m Northern Powerhouse Investment Fund for small businesses. But are we doing enough to connect the knowledge and enterprise that exists right across the country? The government recently announced two new ‘tech corridors’ from Oxford to Cambridge, and Cambridge to Norwich. But is there scope for virtual ‘corridors’ from Cambridge to Liverpool? Oxford to Manchester? Right across the UK? While infrastructure takes years to progress, is it time to think more imaginatively about how we can help back and link digital hubs on the ground, through enterprise zones, universities, startup communities and investors right across the UK? The hard-work is already being achieved by founders. We now need to make sure our tech-driven potential and aspirations are matched right across the UK.